New Zealand Printmakers: Proof Makers, 21Oct-13Dec, Hamilton: Proof Makers , an exhibition of 9 contemporary NZ Printmakers, will be open to the public from Monday 21 October to Friday 13 December 2...
Posted by Lynn Taylor at 10:43 PM No comments:

12 aluminum plates were coated in acrylic hard ground and installed at Waikato University. Staff and students were invited to ‘make their mark’ by scratching on the plates. Likewise 12 plates were distributed at the Dunedin School of Art. 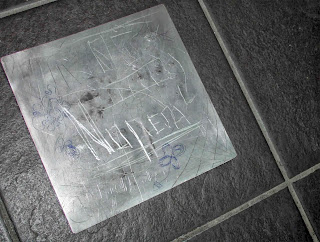 The plates were etched in a copper sulphate and salt solution and printed progressively in either intaglio or relief with Charbonell inks (White, sepia and red ochre) on Incisioni paper. Silver leaf comprised as my layer to complete 25 prints and the work has passed through the press a mighty 325 times upon completion. Each print has a hole in each corner in an invitation to extend the collaboration further - while on exhibition viewers may rearrange the prints into a composition that suits them. I hope someone sends me a photo/video of this activity. 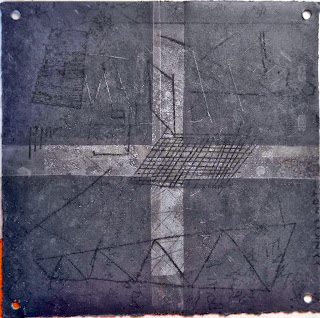 It was an interesting process for me to print imagery which I had less control over - however I found this to be quite liberating. Instead of doing my usual head banging banter of "if only this line was thicker, thinner, bigger, smaller, upside down" etc I just had to get on with it by responding to each layer and working more decisively. The etching process changed the plates - one I left in the solution for a week, another etched through the imagery because the wrong side was scratched, another revealed lovely patterns on the back of the plate.

While printing I had to utilise some tricks, for example, many plates were text based and written right reading and so would print in reverse - so I off set printed one - but to no avail really as it just read as a texture after being printed over silver leaf. The paper started to break down after about 4 layers but I found if I wet the back of the paper with a spray bottle and talcum powdered the ink side I had a better chance of success.  Initially I was going to print the plates completely over one another but instead used a mask or cut some up and printed partial plates -thanks to my friend Kat who helped me out with this idea as I was showing her my concern of capturing all the 24 plates.  I found it fascinating to see what became obliterated and what appeared through in a subtle way further down the track. It was fun to play with the multiples. 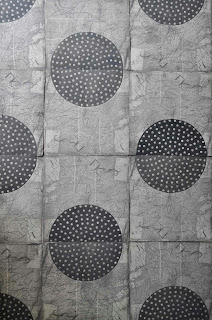 When I was at art school a tutor said to me that I took my layers of printmaking too far, I didn't know when to stop and that I should keep a proof of each stage of a layered work so I could evaluate it. Have finally taken that advice on board?

Thanks to Steph Chalmers for instigating and organising Proofmakers. More exhibition details on Facebook. https://www.facebook.com/events/164960150367830/