I have been using Instagram as my social media platform of late, I like the visual nature and speed of it. This year has involved a lot of art projects and travel which has been immensely fulfilling and exciting, so I have had little time to write up a post. 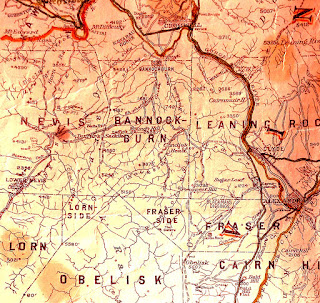 I've just returned from teaching a workshop with the COOTS group. COOTS, what does that stand for I wondered after I was approached by the group to facilitate a workshop. One of the things about teaching different groups is it is good to make the workshop fit the needs of the participants so I like to have communications and a bit of prior knowledge. Google told me that Coots are small American water birds but that didn't help any! No indeed, the acronym stands for Central Otago Outside The Square, hence the meeting place for the retreat being in Bannockburn, a central location for people to travel to.

I gave the workshop a title/theme of Poetics of Place as this is general enough to provide a focus but allow for projects which individuals may already be working on. My focal lens was not actually needed for this group however, I was excited to discover this group were very versed in art making methodologies of brain storming, keeping visual diaries, researching, linking concept with making. For example Jenny is commenting on the Rural Urban Divide and Ali is poignantly utilising the traditional readings of quilts as a platform to present the multi layered complexities of what home means to different people and groups.


Technically we worked with process of gelli printing as a drawing process, cyanotype and photostencil screenprinting, primarily on textiles. Quite a swag for a 4 day workshop but we took over the well appointed Bannockburn Hall, created a darkroom and tapped into our  energy reserves.

Learning and working with three processes in a short time is not for the fainthearted. The creativity of combining the processes however was enormous , with many original and organic results emerging. I enjoy teaching when I cannot answer many questions, when the only way we can see if something will work is by trying it out. Wendy's stencils made out of transparency film got coated in paint and worked deliciously, blocking the light on her fabric cyanotypes. The combination of rust and coating previously dyed fabrics provided other levels of interference that was very successful.

Creating yardage for use in future projects was a goal for many. This fits with my approach of creating freely and editing afterwards. This goal was certainly achieved. Looking forward to seeing some of this work integrated into an upcoming exhibition the group are having at Central Stories Gallery in Alexandra.


To produce our image screens we coated 43T mesh screens with photostensitive emulsion, dried it and then exposed them under a 500 Watt Mercury Vapour UV Light. (Hanging off Gilbert's ever handy tripod) The imagery was drawn or photocopied onto transparency film and 'secured' onto the screen with a piece of 4mm glass to get good contact. Our little A4 screens fitted well under the lamp and took about a minute to expose. For the larger ones we did a one minute exposure on half and carefully slid the screen along and gave another minute on the other half. After wash out in warm water of the unhardened emulsion the screens were given a post exposure of ten minutes before use. This pop up exposure unit worked very well, I love my light as it is also useful for cyanotypes if the sunshine isn't playing ball. I got mine at https://www.ideal.co.n and while the light is an ok price the expensive bit is the fitting. :-(

Working as an artist and arts facilitator requires a lot of planning and juggling that does not bring financial security but the creative results and friendships are meaningful rewards to me. I have been asked to give an informal talk to students on the way I sustain my career and I believe a lot of this comes down to networking and the sharing nature of people involved in the arts. One workshop can lead to another, in this case I have been invited back to teach a design based workshop with COOTS in the future.  The thing that really sustains my practice is the gifting of resources that comes from my network. From this workshop (ok, ok a big plus was that the group fed me lots of wonderful food, but also...) Robyn gave me some wonderful old hand drawn maps that will be used in a future class. Wendy had a connection with a place I have always wanted to photograph, so getting permission becomes a possibility. Steve, a friend from another project, has 3-d printed me a printing press so I can print almost anywhere! https://openpressproject.com/  When I was at art school there was a quote on the wall about how we achieve more as team together than as individuals, so true. Thank you to everyone who has supported me!
Posted by Lynn Taylor at 8:10 PM No comments:

Coccolithophores are a group of microscopic phytoplankton found living in earth's sunlit oceans. These single-celled algae are surrounded by armoured plates ('coccoliths') made from calcium carbonate (limestone). They are vulnerable to ocean acidification; coccolithophores will be threatened in future ocean phytoplankton communities, with potentially dramatic consequences for the global carbon cycle.

During New Zealand International Science Festival (6 – 15 July) The Sandpit Collective (Dr Jenny Rock and Lynn Taylor) combined with Ro Allen, a candidate in Science Communication at the University of Otago whose PhD research focuses on coccolithophores.

To share concern regarding the projected increase in ocean acidity due to climate change and to highlight the significant challenges for coccolithophores we designed a SciArt experience as part of the Ōku Moana exhibition at the Community Gallery in Dunedin.

The Sandpit Collective believe that engaging people in art and aesthetics can be a way to raise awareness and share scientific knowledge.


Visitors aged 12+ (and for the occasional younger person who persuaded us) were invited to make their own blind emboss prints of healthy and unhealthy coccoliths. Working around a press is  a communal activity and provided a great opportunity to discuss the role and importance of coccolithophores in trapping our carbon emissions.


Prints were taken away in an information pamphlet that Ro published so people could follow up on scientific specifics after the experiences.

Alongside participants making emboss prints to take home most contributed a print to the community art work which built up over the course of the exhibition. We had over 100 participants with in excess of 400 blind emboss prints made.  Thank you to everyone who participated and helpers: Pam, Jesse,Trevor, Sara, Becky, James and Scarlet to name a few.


Laid out in a grid the prints become like a survival blanket - a way of visibly seeing the importance of this phytoplankton that is too small to see with the naked eye.


The paper we used was off cuts from a business associated with the University of Otago. The prints, when stacked resemble the sea and ocean floor which lead to the inspiration to photograph the prints back in the habitat of the coccolithophore, the sea.


It's the middle of winter in Dunedin, in fact the exhibition was aligned with Matariki celebrations and my feet went numb in the sea whilst retrieving the prints.

In a poetic happenstance prints that tumbled back to shore with the waves were added to with a layer of sand. Beautiful incidental drawing that felt like an appropriate closure to a week of appreciating our oceans.

Interested groups are welcome to use these texture rubbing and solar plates as a starter kit for their own SciArt activity if you contact us and organise courier of the items.
Other items of interest at: https://www.facebook.com/events/2034430683438301/

This info will be in the catalogue - see website for more details.


This print based mixed media class explores a variety of interventions on paper and fabric towards creating a collection of layered surfaces, textures and experimental samples.
The course of the week is structured with some time each day allocated to introductions to various print media, demonstrations and some short activities to help identify artistic individuality.  Participants then expend from this base working on their own projects and goals with support.

We will cover printmaking techniques that lend themselves towards abstract and painterly effects through mono, rust and offset printing. Resulting prints can be integrated with solar printmaking which is an accessible process capable of producing detailed graphic and text plates. Further interventions such as hand stitching, piercing, cutting, folding and encaustic wax can then be applied. The results can remain as samples or be taken further: stitched into a book, a ‘quilt’, collaged onto substrates of foam core, mdf and laser cut out shapes or resolved as a three dimensional assemblage like a figurine/puppet (check out ‘bricolage’ for ideas) or jewellery.

There are no prerequisites for this course, it is suitable for beginners to advanced makers. Because mixed media is so flexible it can also become overwhelming, so many choices! The only requirement, to give yourself more clarity, is that you are asked to consider an approach, topic or theme that you would like to focus on over the week and also bring along an image of an art work that inspires you. 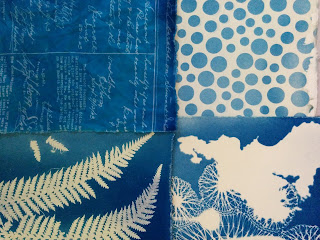 Over the weekend of 3rd and 4th of June Stewart Island locals and visitors came together for a Photography workshop with Graham Dainty http://www.photofiordland.co.nz/ and a Cyantoype workshop with me. We also enjoyed a fabulous shared meal and evening talks!


Little bit of info: The cyanotype process for making prints was invented by Sir John Herschel in 1842 and came from his discovery of the light sensitivity of iron salts. It produces a deep indigo image (known as Prussian Blue), which can be printed onto many surfaces. English Botanist  Anna Atkins used the process for what is considered to be the first work with photographic illustrations, namely her Photographs of British Algae: Cyanotype Impressions (1843).

Cyanotypes are also referred to as sunprints. There are different recipes, we used a traditional mixture using 2 solutions, a combination of Ammonium Ferric citrate (iron), Potassium ferricyanide and water.  The mixed solution was coated onto the paper in the dark with the help of red light torches (which were in abundance as used on the Island for Kiwi spotting), dried quickly with hair dryers, exposed to sunlight and washed to remove the unexposed chemistry. 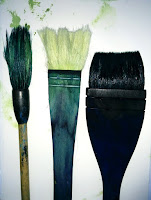 Lots of experimentation went on - using different mediums to block the light.

On day two we worked with digital negatives which required more experimentation with timing of exposures.

Jo Learmonth organised some images from the Stewart Island Rakiura Museum for use for this project, applying the Creative Commons License. It was magical for me seeing these images from the past appear after exposure and washing out.

I find this a super useful reference site:  www.alternativephotography.com

The weekend was made better by significant help from the Photography Department @ Dunedin School of Art, where I  pre-coated some papers and the University of Otago. Thanks to Dave Warren, from the Chemistry Department, fellow cyanotype enthusiast Steve Ting from SciComm (who will be hosting an upcoming workshop at Otago Museum) and Tallis Lentz, our chief chemical mixer from the Chemistry Outreach Programme.

Thanks to Stewart Island Promotions for organising this creative weekend - I hope there is a repeat next year.
http://www.stewartisland.co.nz/
Posted by Lynn Taylor at 6:00 PM No comments: