In mid September Jenny Rock and I went to Stewart Island to facilitate a printmaking workshop and exhibition along with assistants Elsie Percival, Ellen Sima and Lydia McLean. We advertised a ‘Printmaking Workshop with an Island Conservation Twist’ in the Stewart Island News, outlining the workshop goals and theme.  Basically, a weekend ‘drop – in’ printmaking workshop, which was offered to locals and visitors, that was to be subsequently exhibited in the Community Hall the following weekend. Attendance was free and people could elect how they stayed and participated. Inclusion was a goal but our team did experience a bit of teeth gnashing. Would anyone come along? Or would we get too many people and not have enough materials? How long would people stay?  This unorthodox approach was a deliberate trial to begin exploring how printmaking could create a platform to encourage community issues to be expressed in new ways. 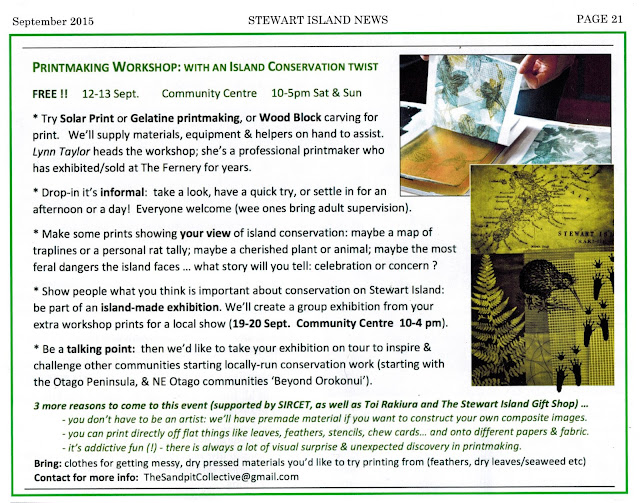 A ‘drop-in-do -a-print’ scenario may not sound unorthodox but our workshop had a specific conservation and biodiversity focus linked with a major local (and national) controversy about methods of predator-control.  The art work being produced needed to link with content and concept, not just look ‘good’. We resourced some relevant, specific imagery by a variety of means including photographing moths, bones, native birds and eggs from the collection at the Otago Museum, downloading PDF's with images of animal tracks recorded on tunnel papers, gathering poison information sheets (eg. Brodifacoum), looking at SIRCET's website and did a lot of internet searching in general.

Some of this imagery went on a resource table for inspiration and reference and some was translated into digital negatives suitable for make relief solar printmaking plates. High contrast black and white is needed to produce a relief plate and so I manipulated images in Photoshop as much as I could before printing them out. A challenge was that a lot of the available imagery was in a low resolution, so  while this is ok for online viewing the definition may be lost and edges are pixelated or jagged. With the example above of the Chewed Pate I had to draw into the printed out negative with black pen before printing the negative onto transparency at Uni Print.  (The toner needs to be dense enough to block the light and so it is best to use a quality commercial printer.)


Participants began by printing mono prints to get the feel of the rollers, ink and press and to create  backgrounds suggestive of sea, sky and landscapes. We set up a Gelatine printing table as an alternative medium and as a space for people to try organic printmaking.  Gelli print is quick and  capable of producing abstract backgrounds and detailed surface prints directly from flat materials.


Participants added to their backgrounds, building up narratives by relief and intaglio printing multiples. Some made their own solar plates and others carved woodblock  plates.

I am always going to be biased about printmaking, always top of the list for me partially because printmaking exists in a community. Print shops grew out of a need to share equipment and technical knowledge as well as to have a creative environment to work in, where work can be discussed and ideas can be exchanged. However, we asked ourselves if print was the best medium. Setting up a print workshop takes a lot of time, money and equipment. Hence it is largely not taught in our school systems but perhaps this is an advantage, most people came to the workshop with little or no experience which is nicely democratic.

Our team went in with the teaching philosophy that there were multiple right ways of making the prints, no wrong answers. Brief instructions were given on rolling the ink and intaglio wiping but I witnessed that a lack of burgeoning rules and printmaking knowledge encouraged diverse creativity and experimentation and production was very high.
Making or selecting your own printing plates followed by printing images and words becomes an act of self- publishing which strongly enables people articulating their own opinion. The ‘multiple right ways, no wrong answers’ philosophy flowed into the conceptual responses of the participants and resulted in some works being ambiguous or titled as questions.
We primarily printed edge to edge, bleed prints on small pieces of paper. Therefore multiples could be made and if something did not ‘work’ or ‘fit’ it was only a small loss. People were extremely productive - Stewart Islanders have stamina and their bond with their natural environment is very evident .
Over the week I worked as an artistic editor, collating together people’s small individual prints onto larger pieces of paper to create a final artwork. People had varying degrees of input to the arrangement of their collated print and in most cases I added block of plain colour (a rest spot for the eye) something that we did not have time to print on the workshop. A small selection of some of the artworks.....

Lydia McLean and Tom Csima (who came down at the end of the week) curated the ‘locals’ exhibition on the basis of colour and the grid like layout echoed the tile composition of the prints themselves. The exhibition had a huge number of enthusiastic attendees, many of whom came back multiple times, people wanted to see what each other had made and thought (Participants wrote an artist statement which accompanied their work). It was in this exhibition space that the platform for discussion really happened and workshop participants also commented that they felt a heightened awareness of ecological issues since the printmaking.

What is next? The SIRCCA prints will go north to Beyond Orokonui and be represented in a series of exhibitions in conjunction with The Sandpit, after which work will be returned to the makers. There were many useful outcomes from this trial which will be utilised in future workshop/exhibition combos. Ideally a longer residential workshop would be ideal. There is lots to think about, such as of making some information and technical videos.


In future maybe participants could make two similar prints – one to keep and one to exhibit or possibly there could be an exchange with another community. For this workshop we did not want the restriction of editioning but if there was longer workshop participants could trial some prints and then produce a small edition or series.

Working in the eco art realm means attention must be paid to materials. We worked with solar plates, gelatine printing and oil instead of solvents. We asked participants to bring ferns, feathers and leaves which printed effectively.  Two participants, Nic and Di, came to look at the workshop then walked along the beach and collected rubbish. They subsequently printed their finds and made us all swoon in admiration. Next time we could include more collecting of samples and materials from the local area and items could also go to create a specific children’s printmaking table with stamps made from corks and bottle caps etc. More focus needs to go onto nontoxic printing inks. There are Akua soy based inks but these not quite stiff enough for holding clarity in relief plates. I read someone was printing with soil, this makes me wonder what else we could be printing with.

Our team of artists and scientists worked quickly to absorb as much as we could about each other’s fields while making some lovely relationships with members of the Rakiura/ Stewart Island community. (We even fitted in some recreation - thanks to Megan for swift tours of the Island and Ulva for a tour of Ulva Island. There was also the Boot Camp experience.) We all want to return! I loved that printmaking and art felt so purposeful.  This venture had the support of many people and companies but I would like to give special mention to SIRCET, the Stewart Island Rakiura Community & Environment Trust, for their contribution.  SIRCET's mission is to "pursue projects that will enhance both our community and environment". sircet.org.nz/

Elsie Percival,one of the workshop facilitators is also a Science Communication Master’s candidate from Otago University. Elsie presented her own project ‘Our Island- Conservation on Rakiura’ on Stewart Island in a parallel exhibition at the Community Hall the same weekend. Her Rakiura/Stewart Island specific art work and photographs were displayed alongside plants from the Community Native Plant Nursery (SIRCET) and trapping equipment from DOC. The photo below shows some of the portable exhibition kit, named The Sandpit, that the variety of her work was curated within. Elsie’s thesis and other in-depth writing on the ‘Our Island’ project is planned so I will link that to here when she publishes her blog.